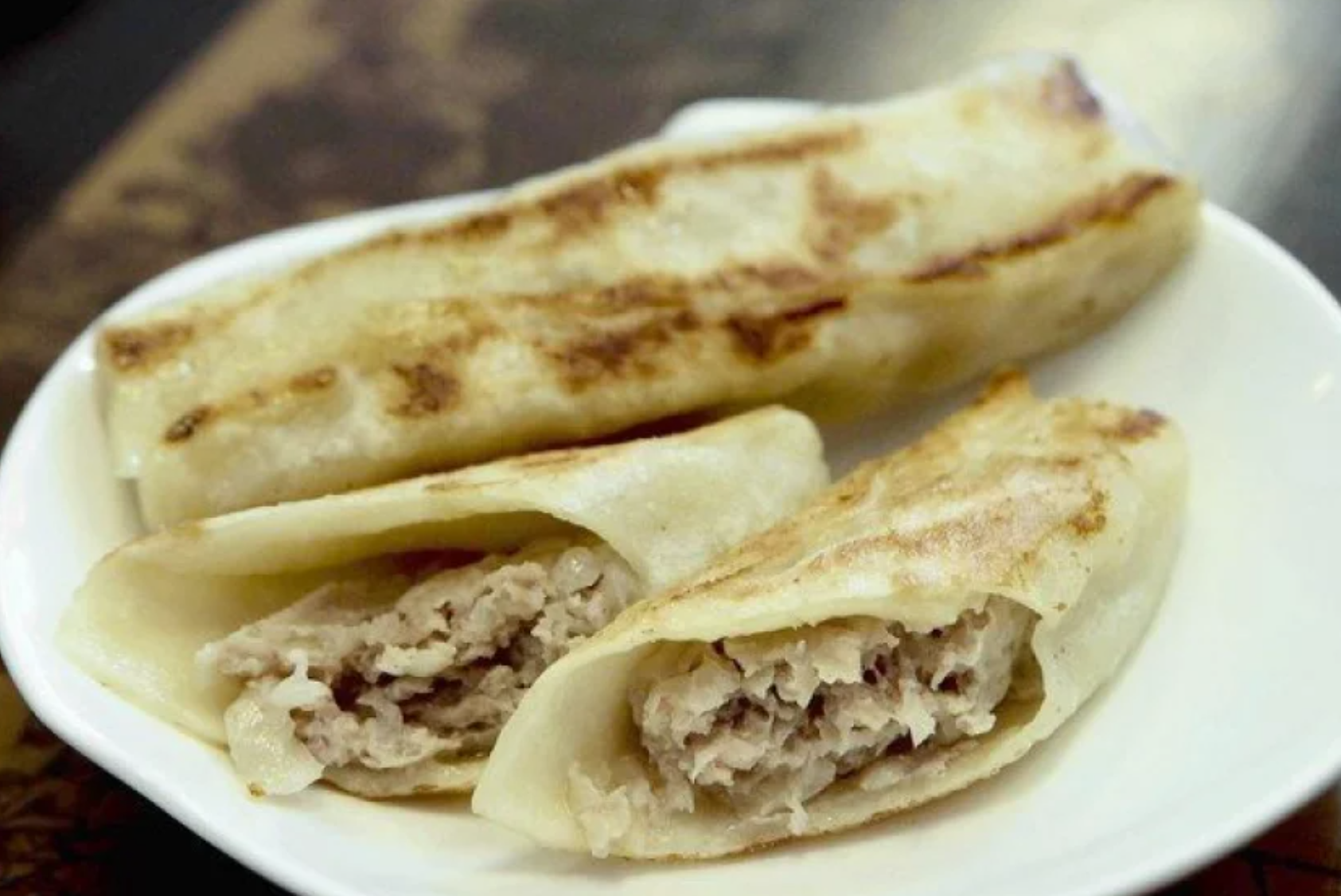 Jonathan Gold | Los Angeles Times — My first restaurant column for The Times, written when I was still a music writer who answered his phone “Guns N’ Rosesdesk,” was about the concept of single-dish restaurants, places like Lawry’s, Shiro and Philippe, whose menus may be as long as a remix of “November Rain” but which might as well serve just the one thing they are famous for. I was writing then about El Parian in the Pico-Union district, still the best place to go in Los Angeles for a bowl of Jalisco-style birria, but the single-dish principle is universal. As a waiter at the original Palm was once reported to have said, “Sure, I’ll bring you a menu. But first, tell me how you’d like us to cook your steak.”

The Asian swath of the San Gabriel Valley is, of course, a hotbed of single-dish restaurants, from the spicy fried lobster at Tan Cang Newport Seafood to the Beijing duck at Beijing Duck House, the spring rolls at Golden Deli and the roast catfish at Phong Dinh. Din Tai Fung in Arcadia is where you go for xiao long bao, soup dumplings, although the menu lists dozens of other things; 101 Noodle Express in Alhambra is where you go for flaky, crunchy beef rolls, although it opened as a restaurant dedicated to the cult of De Zhou chicken, a famous dish from Shandong.

Hui Tou Xiang Noodles House is a tiny new restaurant in a San Gabriel mini-mall, a few steps from the only restaurant in town serving a proper version of Nanking duck, and right next to Luscious Dumplings, an insanely popular noodle shop beloved for its crusty pan-fried dumplings. In the first months of Hui Tou Xiang, it was not unusual to experience a 45-minute wait at the established restaurant while the newer place sat empty. The first time I visited Hui Tou Xiang, tipped off by blogger Louise Yang, at least three people asked me if I’d wandered in by mistake; whether I had just given up on the line next door…. 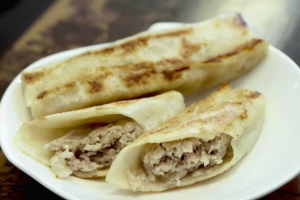 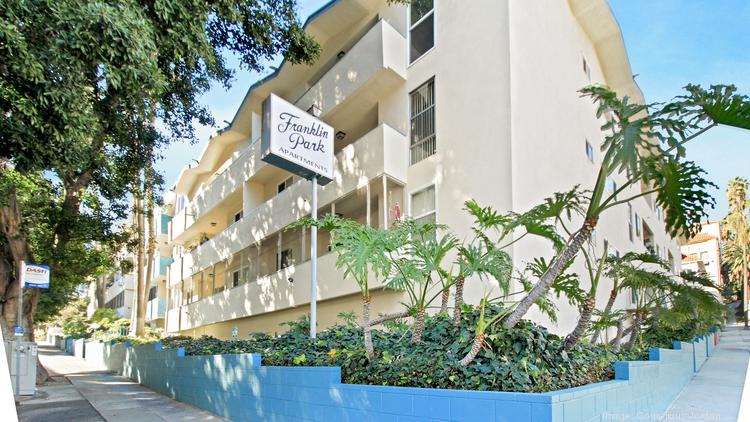 Located at 6615 Franklin Ave. between Highland Ave. and Cahuenga Blvd., Franklin Park Apartments lies within walking distance of the Hollywood Bowl and the John Anson Ford Theatre, and is near Runyon Canyon, Griffith Park and the Hollywood sign, as well as the Hollywood Wax Museum, Hollywood Pantages Theatre and Universal City.

The building had 21 vacancies at the time of the sale.

“Regardless of concerns about higher-than-average vacancy rates and softening rents throughout Hollywood, we were able to generate 40 buyer tours and secure 17 competing offers for Franklin Park Apartments,” said Rick Raymundo of Marcus & Millichap Inc., which orchestrated the sale. “Most investors saw a valuable opportunity in the fact that the asset was so well-maintained yet still offered the chance to upgrade and modernize the apartments.”… 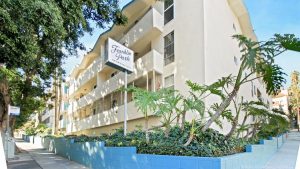 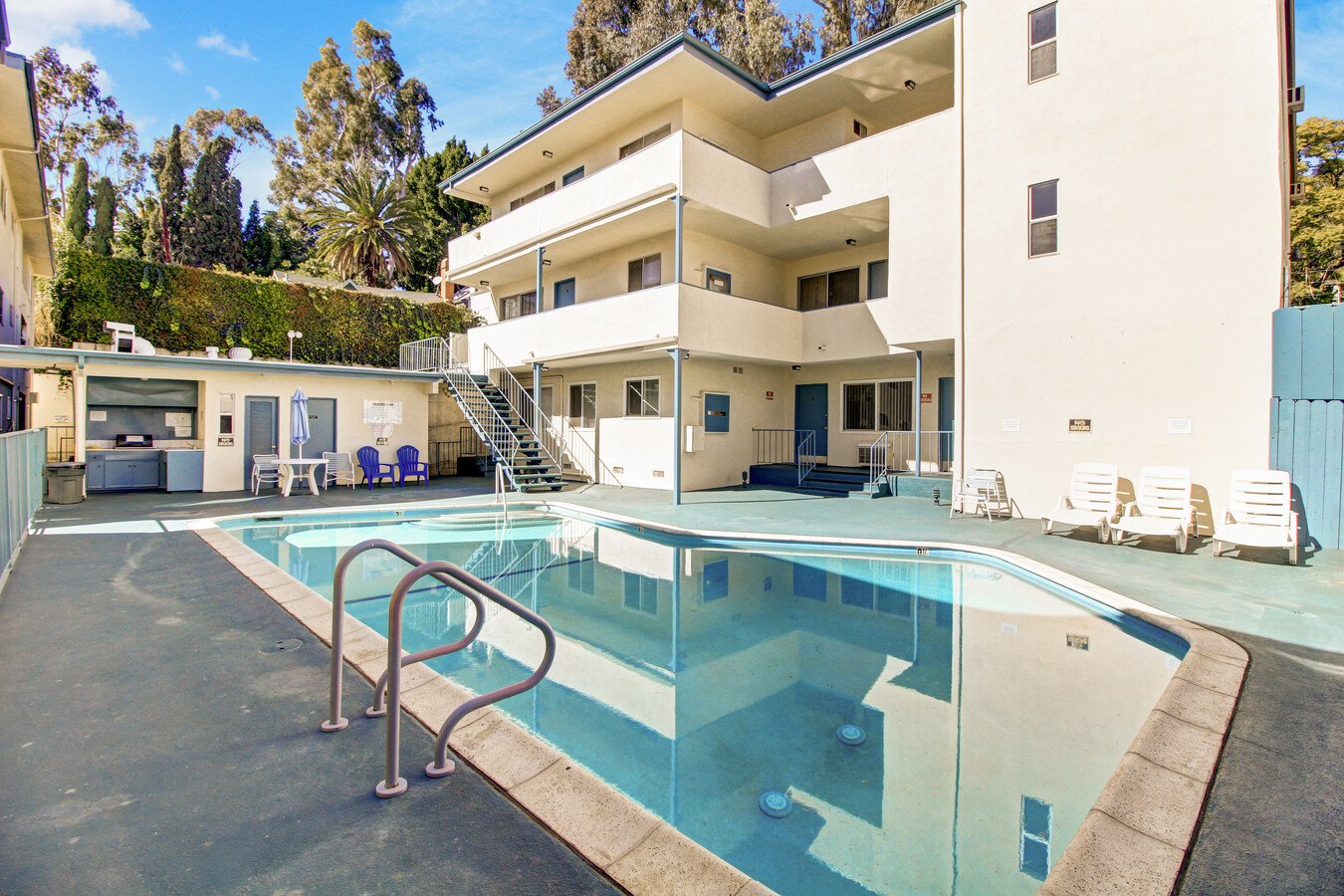 Amenities at the Franklin Park Apartments include a swimming pool, a parking garage with electric charging stations and a courtyard.

The building had 21 vacant units at the time of the sale, according to brokerage Marcus & Millichap Inc.

Marcus & Millichap’s Rick Raymundo and Shane McConnell represented the seller, a family, and found the buyer. Coda Equities purchased the building, according to CoStar Group Inc.

“Regardless of concerns about higher-than-average vacancy rates and softening rents throughout Hollywood, we were able to generate 40 buyer tours and secure 17 competing offers for Franklin Park Apartments,” Raymundo said in a statement. “Most investors saw a valuable opportunity in the fact that the asset was so well maintained yet still offered the chance to upgrade and modernize the apartments.” 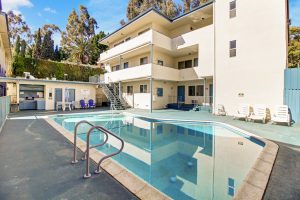 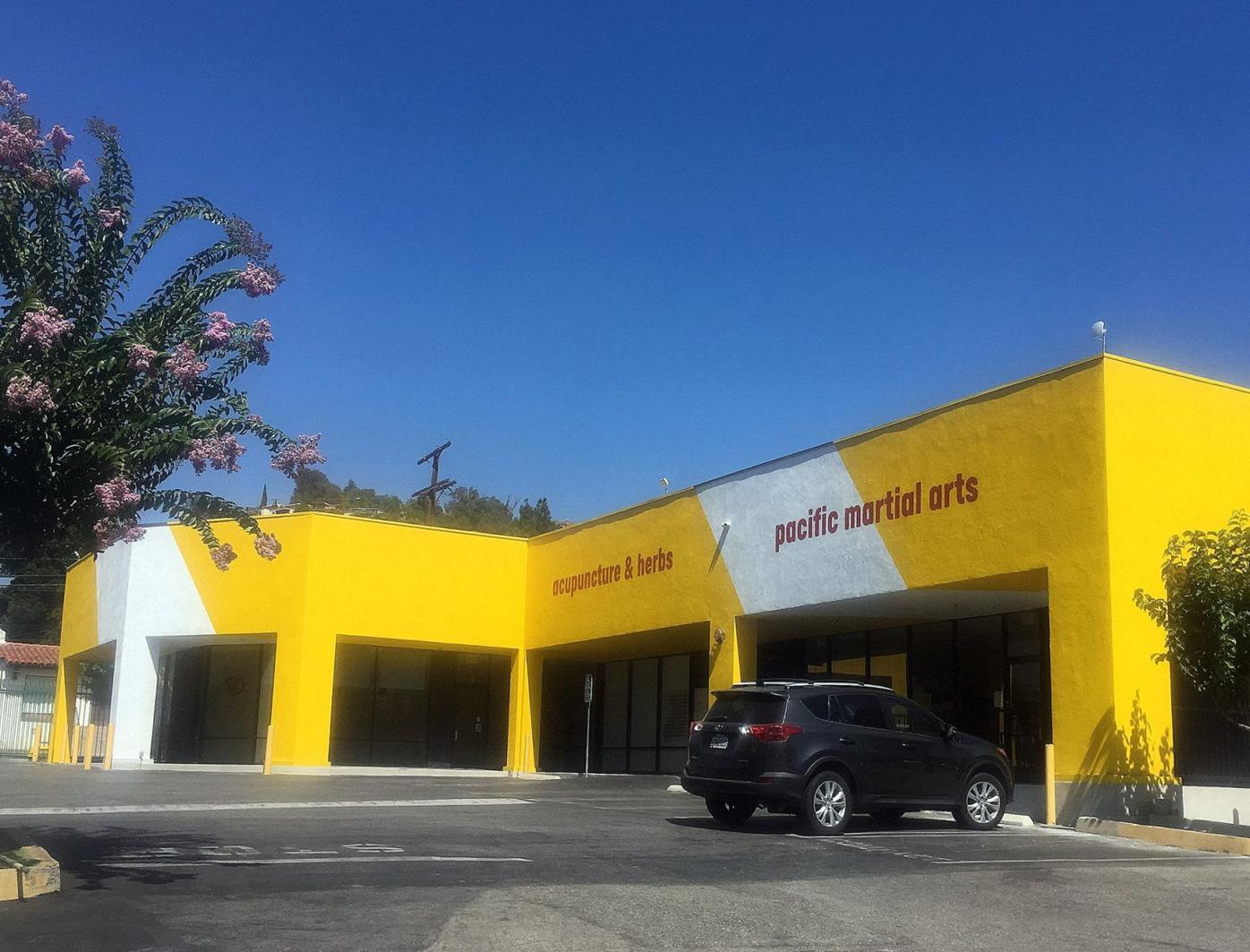 Glassell Park — The last time Verdugo Plaza attracted much attention was six years ago when a fire destroyed the most prominent tenant, the Verdugo Rancho Supermarket.

Now, the same small shopping center is attracting attention with a bold new color scheme. It’s part of a makeover that involves a high-profile architect and a bid to attract new tenants to a gentrifying neighborhood.

The three-building shopping center at the corner of Verdugo Road and Arthur Street had already been undergoing an evolution in the gentrifying neighborhood before it was recently painted in bold shades of yellow and white.

The pace of change began to pick up last year after the real estate investment firm Coda Equities purchased the half empty property for $6.2 million. The firm has a reputation for buying commercial properties, renovating them and finding new tenants.

“This center serves as a destination for millennials, artists, writers, musicians, hipsters and working class of the Glassell Park community,” said CBRE broker Karol Le, who represented Coda in the deal.  “It’s irreplaceable and fills an important role in this neighborhood.”

The owners are now in the process of seeking new tenants to fill the remaining empty spaces.

In addition to the bold new color scheme, the firm of Silver Lake architect Barbara Bestor has been hired to redo the former corner market,  according to marketing materials. Bestor’s work has included new housing developments in Echo Park, stores for the Intelligentsia coffee chain and the renovation of Silver Lake’s landmark Silvertop house.

“The scope of work includes opening up the corner building to the surrounding neighborhood and updating the signage, color, and landscape for the other two buildings in the plaza,” said a marketing brochure.

No word on when the renovations will be completed. 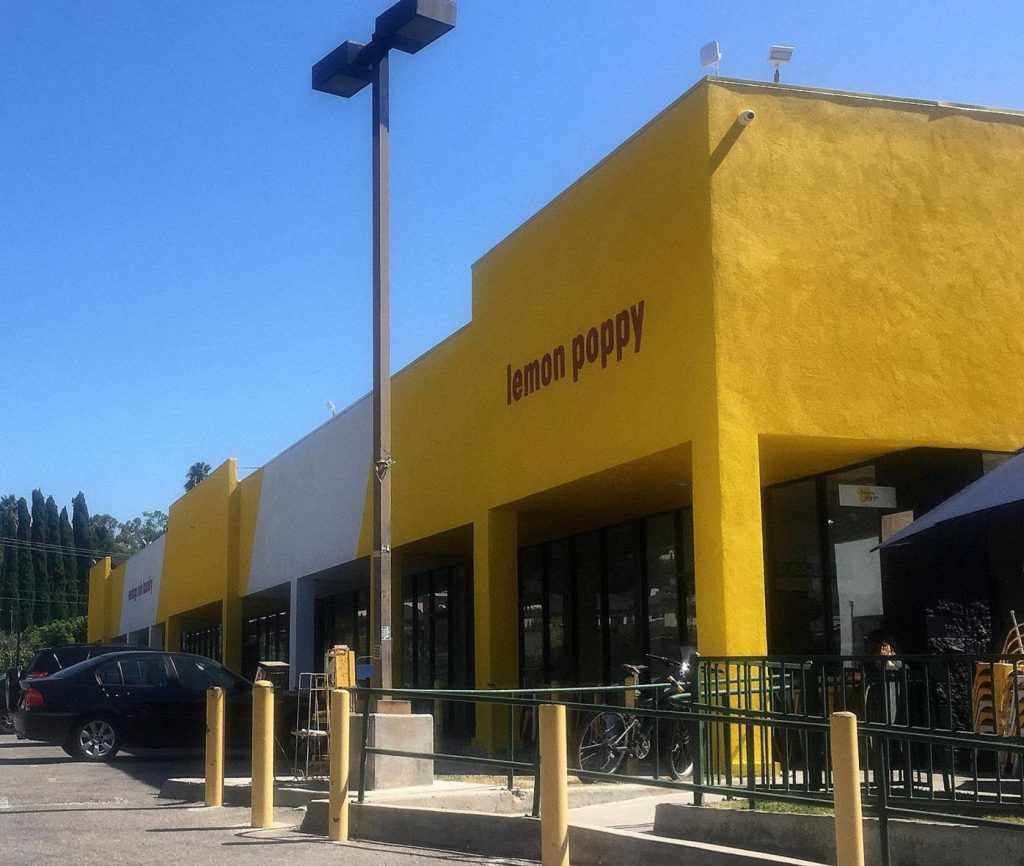 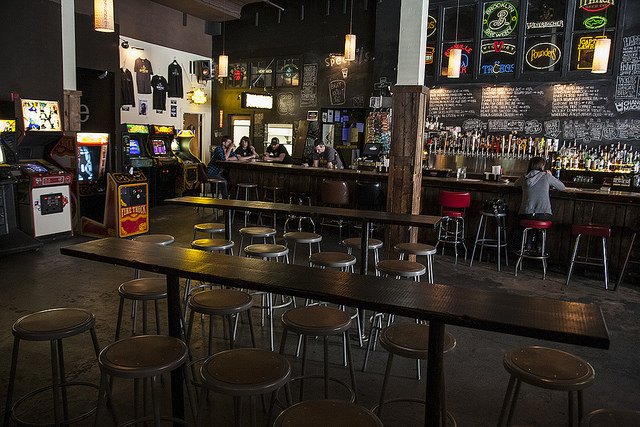 The NYC import finally arrives, two years after announcing they would come to L.A.

Barcade—New York’s best-known arcade bar—finally opens in L.A., making good on an announcement they first made in 2017. The arcade bar concept will open to the public on May 6.

“We have been considering expanding to Los Angeles for a few years, but it took a while to find the right space,” Barcade CEO and co-founder Paul Kermizian said when the lease was first signed. “We considered a number of neighborhoods, but ultimately decided we liked the vibe and community in Highland Park, and felt this was an area in which we could contribute positively and thrive.”

Barcade’s new home was previously occupied for 53 years by the family-run El Arco Iris Mexican restaurant, the first business of the Cocinas y Calaveras group which has grown over the decades to include the Mercado locations and Yxta Cocina in downtown L.A.

Several bar-arcades are already open around L.A. Just down the street from the new Barcade is Walt’s Bar in Eagle Rock, which specializes in pinball machines. Elsewhere, Angelenos can mix nostalgic childhood amusements with adults-only beverages at EightyTwo in the Arts District, Button Mash in Echo Park, and Mission Control in Santa Ana. (Just don’t call any of those places a “barcade”—since a 2007 legal dispute, only Barcade can use that trademarked term, and they’re quick to defend it.) 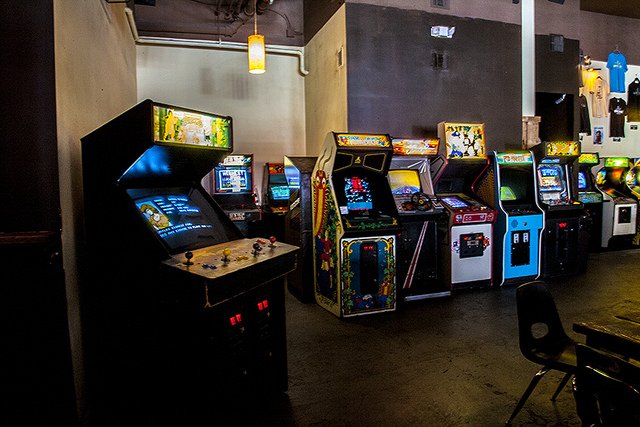